Benefit for Breathe - A Foundation for the Artist 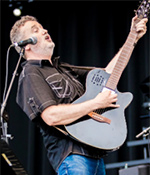 As a singer/songwriter, Michael has released five albums, performed widely, and collaborated and recorded with a bunch of talented musicians. He is a Chick

Singer Night (Are You Man Enough) veteran and now lives in Ventura, California working as an audio producer and studio manager.

Back to VC CSN main page